“Anh Thanh Niên” of HuyR has just launched not long ago but has achieved admirable achievements.

If a few days ago, the fans were still stirring because of the “threat” of the song “Anh Thanh Niên” (HuyR) to Trấn Thành or Đen Vâu, recently this product has officially “knocked out” famous names of Vbiz to make themselves the top 1 trending Youtube. Accordingly, just after nearly 2 days of the official MV release, “Anh Thanh Niên” has surpassed “Một Triệu Like” of Đen Vâu to reach the “throne” trending with more than 5 thousand views on Youtube. 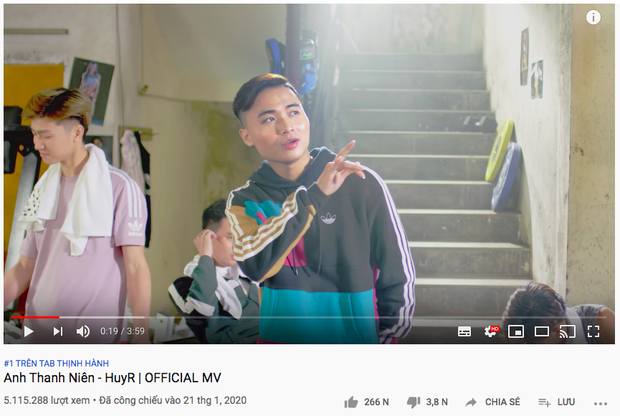 Achievements after nearly 2 days of broadcast of HuyR with “Anh Thanh Niên”.

Even surpassed the two big names Trấn Thành and Đen Vâu to achieve this achievement.

Previously, only with the demo sitting on the sidewalk ice tea shop, HuyR “stormed” with his song “Anh Thanh Niên”. Although it was just a demo, it ranked high on the top trending and right from that point, this product was expected to hit when it was officially released. And indeed with the content close to the lyrics very life has struck the psychology of many young people near the age of 30 but still keep the soul exposed young. “Anh Thanh Niên” is also considered as one of the hottest songs in the period near the New Year 2020. With this initial success, many people also hope HuyR will soon release more songs to satisfy the audience favorite.

An Nhi/Helino
Next Post Mắt Biếc got over “Em Chưa 18” with revenue of 172 billion, ambition of 200 billion through the Tet holiday 2020?
Previous Post ‘Yêu một người tổn thương’ reaches 5 million views on YouTube